Seafood exports to China maintained at over US$1 billion

Although seafood exports to China have continuously decreased, in 2021 they are forecast to remain above US$1 billion. 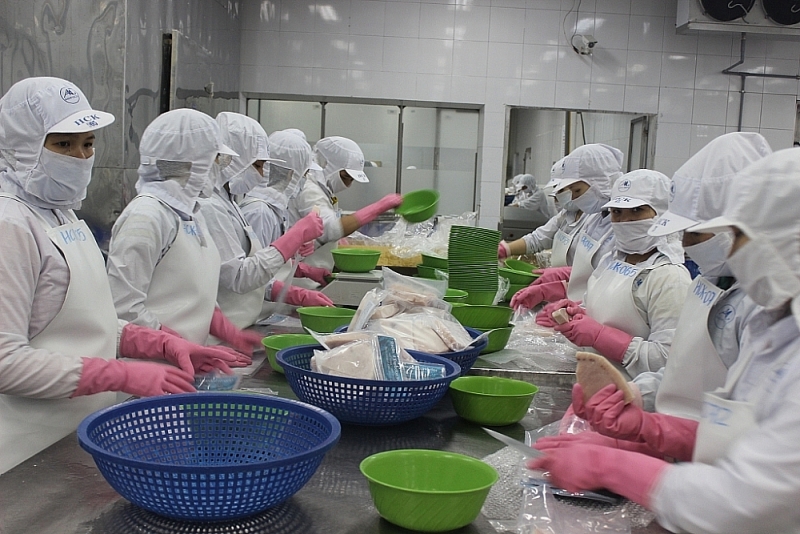 Seafood enterprises wish to be supported in terms of export to China. Photo: T.H

However, exports to this market have declined continuously since the beginning of the year, so in the first three quarters of 2021, exports to China only account for 11% of Vietnam's total seafood exports.

According to Ms. Le Hang, Deputy Director of VASEP.PRO Center, since April 2021, Vietnam's seafood exports to the Chinese market continuously decreased by 11-51%. The reason is that the strict control of imported frozen seafood at the main ports of this country caused congestion and costs for Chinese importers, affecting the profits and demand of importers and Vietnam export companies.

In particular, the outbreak of the Covid-19 pandemic in Vietnam since mid-July has caused seafood exports to China to fall even further, with a decrease of 36% in August and 51% in September.

Not only this year, since 2020, seafood exports to China have continuously decreased, due to the strict control policy on imported seafood, causing congestion at ports in China.

Since the third quarter of 2020, China has repeatedly announced the detection of coronavirus on frozen seafood packaging imported from a number of countries such as India, Ecuador, Russia, Argentina, so this country's Customs has announced that it will increase inspection of imported frozen seafood to prevent the outbreak of COVID-19.

In addition, China's seafood production and export industry was significantly affected by the Covid-19 pandemic, so the country wants to protect domestic seafood products, so it should find ways to limit imports. China has also been promoting strong communication of people using Chinese products.

According to the Vietnam Association of Seafood Exporters and Producers, by the end of September 2021, Vietnam's seafood exports to China decreased by 20.5% over the same period last year, reaching US$768 million. In which, the two main products, shrimp and pangasius, accounted for 39% and 36% of the total seafood export value to this market, respectively, reaching US$298 million and US$279 million, down 23% and 20% over the same period of 2020.

In addition, China is also an important crab import market of Vietnam, mainly importing live crabs. By the end of September, crab exports to this market reached US$36 million, down 21% over the same period last year.

Facing the above strict control situation, in order to promote the export of pangasius and many agricultural products to China, recently, Vice Chairman of Dong Thap Provincial People's Committee Tran Tri Quang proposed to the Ministry of Foreign Affairs through Vietnam's representative missions in China, to strengthen updating information on production, market, import demand of the host country, opportunities to promote cooperation and the risk of trade barriers for Vietnam’s agricultural products and aquatic products of Vietnam, informing localities and businesses to be proactive in production and export.

At the same time, the agreement with China Customs to consider creating favorable conditions for timely customs clearance of agricultural and aquatic products at the northern border gates. In the immediate future, the Ministry of Agriculture and Rural Development will promptly support and accompany localities and businesses in implementing Order 248 and Order 249, which will take effect from January 1, 2022 for businesses to actively organize production and have business and export plans to meet the requirements of the Chinese market.