The 14th National Assembly passed a resolution approving Vietnam’s accession to Convention 98 of the International Labour Organisation (ILO) and another on the establishment of a thematic supervision delegation of the NA in 2020. 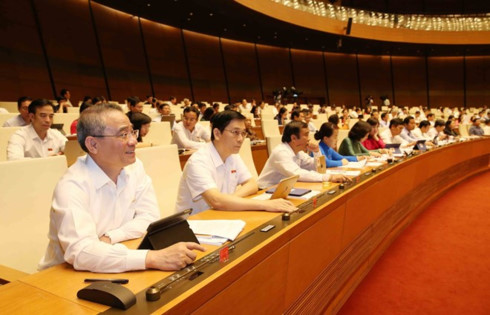 Lawmakers at the seventh working session of the 14th National Assembly

Under the resolution approving Vietnam’s accession to the ILO’s Convention 98 concerning the Application of the Principles of the Right to Organise and Collective Bargaining, which was adopted with 93.39 percent of votes, Vietnam will apply the entire content of the convention.

The NA assigns the Government, the Supreme People’s Court, the Supreme People’s Procuracy, the Vietnam General Confederation of Labour and related organisations and agencies to review stipulations in Appendix 2 of the Labour Code and other relevant legal documents with a view to timely amending, supplementing them or issue new ones to ensure the consistency of the legal system and to realise commitments under Convention 98.

The Government is to instruct relevant ministries and agencies to complete procedures for joining the convention and define the point the convention takes effect for Vietnam in line with the convention’s stipulation.

Meanwhile, the resolution on the establishment of a thematic supervision delegation of the NA in 2020 went through the legislature with 91.53 percent of votes.

The NA appointed NA Vice Chairman Uong Chu Luu to be head of the delegation, along with three deputy heads.

The resolution requires the delegation to report the supervision outcomes to the NA Standing Committee at the committee’s meeting in April 2020, and to the NA at the 9th session in May 2020.

Earlier, the NA approved three laws, which are the Law on Execution of Criminal Judgments, the revised Law on Education, and the Law on Amending, Supplementing A Number of Articles of the Law on Insurance Business and the Law on Intellectual Property.

The NA’s 7th session is to conclude later the same day.