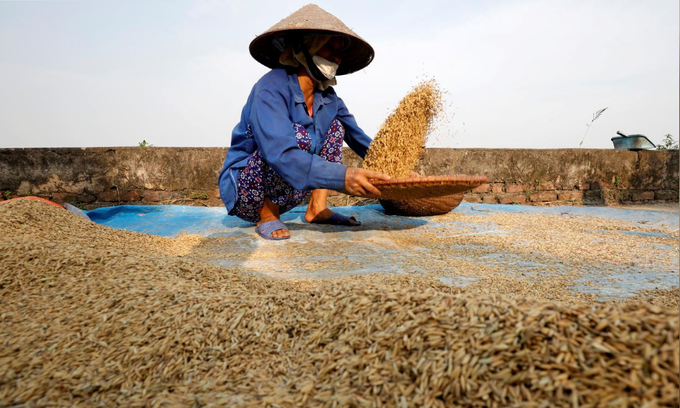 A farmer harvests rice by a paddy field outside Hanoi, June 10, 2019.
Photo by Reuters/Kham.

Rice shipments with customs declarations completed before Tuesday will be unaffected and would still be cleared in accordance with regulations.

The decision follows the Prime Minister's statement at a cabinet meeting on the imperative of ensuring food safety amidst the complicated developments of the Covid-19 pandemic.

However, the Ministry of Industry and Trade has asked the PM to postpone implementation of the rice export suspension, citing businesses' complaints regarding its immediacy.

The ministry said it would reassess the actual output of the winter-spring rice crop, the amount of rice to be exported in signed contracts and the actual amount in businesses' inventories before suggesting a solution.

Mai Tien Dung, Minister and Chairman of the Government Office, told VnExpress Tuesday evening that his office was yet to receive the ministry's proposal.

"Once we receive the document we will submit it to the Prime Minister for consideration and decide whether to suspend shipments from March 24 or not," Dung said.

Vietnam is currently the world's third largest rice exporter after India and Thailand. Last year, the country exported 6.37 million tons of rice worth $2.81 billion, with the top markets being the Philippines at over 2.1 million tons, Ivory Coast, over 580,000 tons, Malaysia, over 550,000 tons and China, 477,000 tons.

Over the past two months, Vietnam's rice exports to a number of countries have increased sharply following the Covid-19 pandemic.

According to a report by the Department of Agricultural Products Processing and Market Development, Vietnam exported 895,000 tons of rice worth $410 million in the first two months of the year, a 27 percent increase in volume and 32.6 percent rise in value year-on-year.

The Philippines continued to be the leading market for Vietnam's rice exports, but both the volume and the value of rice exported to this market were lower than last year.

On the other hand, rice exports to Mozambique, China and Angola increased 5.04 times, 2.76 times and 2.57 times respectively.

The average export price of rice in January was $478 per ton, a 7 percent increase over the same period last year.

The Ministry of Agriculture and Rural Development has said that it would closely monitor the market's developments and increase, if possible, the total area of rice fields for the fall-winter crop from 750,000 hectares to 800,000 hectares.