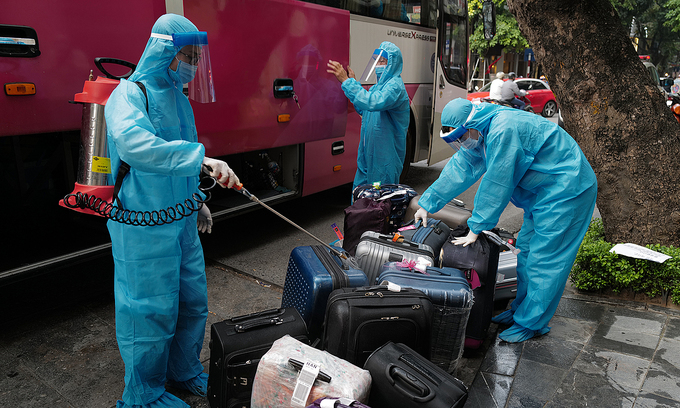 A medical staff disinfects luggage of people that are about to go into centralized quarantine
in Hanoi, November 2020. Photo by VnExpress/Ngoc Thanh.

The Health Ministry has said individuals who have completed the mandated 14-day quarantine and tested negative twice after entering Vietnam will not be released immediately.

This rule will apply starting Tuesday, the ministry said, but did not specify the duration of extension at centralized quarantine facilities.

In the past six days, at least three such cases have been detected, the latest one Tuesday morning - an Indian man in Hanoi. From the first two cases, the infection spread in the community, with 35 cases recorded so far in five localities, including Hanoi and HCMC.

Under the mandated protocol thus far, people could return to normal lives after finishing the quarantine period and two negative tests, but would be medically monitored for 14 more days. During this extension, they are asked to stay at one specific address filed in a declaration form submitted to the health authorities before leaving the quarantine facilities. The form contains all personal information, including full name, year of birth, phone number and email address.

People who have completed the mandated quarantine were allowed go to work or attend school, and advised to follow all the Covid-19 prevention protocol, including wearing masks, maintaining distance from others and avoiding crowded places.

The latest Covid-19 outbreak in the country was triggered on April 29 when a 28-year-old man tested positive for the virus in the northern province of Ha Nam. He had returned from Japan on April 7 and been quarantined for a fortnight in the central city of Da Nang.

After returning home to Ha Nam, he had come into close contact with many people and did not follow the required Covid-19 prevention protocols. So far, at least 19 new infections have been linked to him.

On May 2, several female staff of a bar in the northern province of Vinh Phuc were confirmed to have contracted the virus after they came into close contact with five Chinese male experts.

These experts had arrived in Vietnam to work in early April and quarantined in a hotel in the northern province of Yen Bai from April 9-23, during which they tested negative three times.

After completing their quarantine, the men began working at the Trung Bac A Company and continued to have their health monitored for 14 days at another hotel by local medical staff. However, the experts left their hotel and visited many localities in northern Vietnam from April 23 to 25. On April 28, they returned to China through the Huu Nghi border gate in Lang Son Province. Four of them have since been confirmed positive for the virus by Chinese authorities.

The group has so far infected 15 people in Vietnam – 14 in Vinh Phuc and one in Hanoi.

Until April 29, Vietnam had gone over a month without local transmissions.

Since then, 36 Covid-19 cases have been confirmed, 35 of them related to people who had completed the mandatory quarantine. The other is a man in Da Nang whose transmission source is yet to be identified.