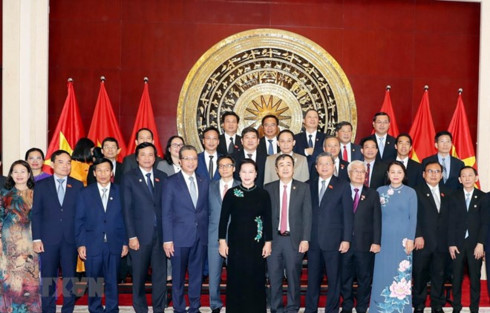 She suggested the corporations to cooperate more closely with Vietnamese partners, especially in the context of the Fourth Industrial Revolution.

Affirming the Vietnamese telecoms market is potential, she advised enterprises to make a market research to grasp investment opportunities in the country.

The same day, the top legislator visited the Vietnamese Embassy in Beijing, where she confirmed the Party and State always care for the Vietnamese community abroad, including those living in China.

Ngan voiced her hope that members of the Vietnamese community will continue supporting each other and respecting the host country’s law.

She told them that her visit to China this time aims at fostering the traditional friendship, deepening the comprehensive strategic cooperative partnership with China and strengthening cooperation with the National People’s Congress (NPC) of China.

The top legislator highlighted that during the on-going trip, she had received leaders of several major groups and enterprises who had shown their interest in landing long-term investment in Vietnam, with modern and environmentally-friendly technologies.

China is now Vietnam’s biggest trade partner, and the latter is the former’s largest in the Association of Southeast Asian Nations (ASEAN), Ngan said, adding that this is an advantage in the two countries’ relations.