Although the demand for Vietnamese textiles is forecast to rise steadily in the short term, firms are concerned that tight material supply will impede their export plans. 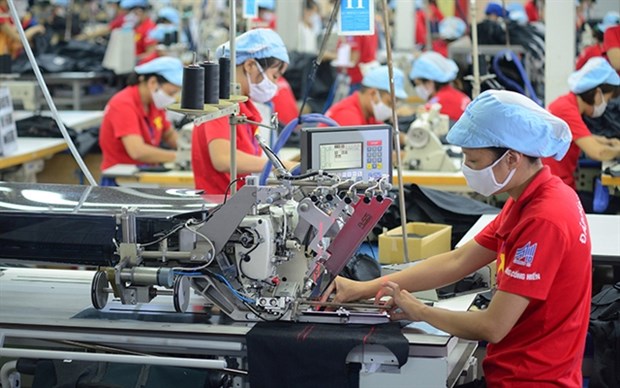 Workers at a Garment 10 factory. (Photo: baosoctrang.org.vn)
Although the demand for Vietnamese textiles is forecast to rise steadily in the short term, firms are concerned that tight material supply will impede their export plans.According to the Vietnam Textile and Apparel Association, export prospects for the industry are getting better as major importers have reopened their economies and various free trade agreements have begun to take effect.Under a likely scenario, Vietnam’s textile export is expected to reach up to 43.5 billion USD in 2022.However, Garment 10 Corp. is concerned that the Chinese Zero-COVID policy and the Russian military operation in Ukraine will disrupt supply chains, hindering its ability to fulfil new orders."The Russian military operations in Ukraine have driven up our input costs. The Chinese Zero-COVID policy will cause material shortages in the short-term, fueling the situation," said Than Duc Viet, director of Garment 10.The director said China remained the leading material exporter to Vietnam, accounting for half of the supply. His corporation has planned to diversify its suppliers in the next 5-10 years to be less dependent on China, but it has to accept the situation and seek support from its partners in the short term.The situation is even worse for Dap Cau Garment JSC., which imports 80 percent of its material from China at the request of its partners.Nguyen Duc Thang, director of Dap Cau Garment, underlined delayed shipments from Shanghai (China) as the main cause for his company's disrupted production. His company has to re-negotiate with its partners to put back delivery."For orders that we cannot fulfil on time due to material shortages, we are re-negotiating their delivery terms. The delivery can be moved to later dates but not so far that we may face high payment risks," he said.Tran Nhu Tung, chairman of Thanh Cong Textile Garment Investment Trading JSC., revealed that this company would seek the substitution of Korean and Thai materials or rely on domestic materials to deal with the shortages.Some other companies also thought of the same idea, but only deep-pocketed ones could make it work due to high costs. Those with limit ed financial capability normally have no choice but to ask for a delay in delivery.Trinh Xuan Lam, chairman of Tien Son Thanh Hoa JSC., said his company had been sticking to diversification to get through a hard time but with little success. Material from other countries is insufficient to fill the gap left by China."We've found new suppliers from other countries and additional domestic suppliers, yet their production still falls short of our demand by around 30 percent," he said.For companies feeling the pain of the shortages like Viet Thang Jean LTD., diversification might go with higher costs due to Chinese price advantages, but they are willing to bear such costs to have more stable production."Never be dependent on a single supplier. We are glad to partner with any country that provides a stable supply, even with higher costs. We accept lower profits to secure output stability," said Pham Van Viet, chairman of Viet Thang Jean.According to the General Department of Customs, textile exports reached 8.8 billion USD in Q1/2022, up 23 percent compared to the same period last year, representing the highest quarterly growth in 10 years.VITAS said Vietnamese textiles are urging the Government to soon approve the Development Strategy for Textile and Footwear by 2030 to make the industry self-sufficient in material production and compliant with rules of origin as stated in free trade agreements./.