The use of geotubes to protect the Go Cong Dong sea dyke in southern Tien Giang province’s Go Cong Dong district has achieved positive results after two years of implementation, but some of the geotubes have broken, according to local authorities. 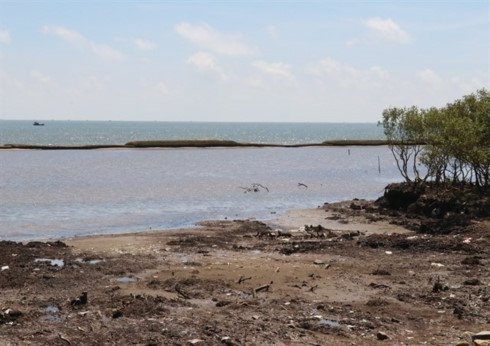 A geotube dyke in Tien Giang province’s Go Cong Dong District. Many of the geotubes have been damaged, leaving the entire dyke with an uneven height.

The geotubes are made of permeable but soil-tight fabrics and filled with sand.

The geotube dyke is used to prevent erosion caused by strong waves and to create alluvial grounds on the shore side where mangrove trees will be planted.

Nguyen Thien Phap, head of the province’s Irrigation and Flood and  Storm Prevention and Control Sub-department, said the first phase of the tube project was completed in December 2016.

The soft geotube dyke, which is 1,400 metres long and about 180 metres away from shore, has helped create alluvial grounds on the shore side.

The amount of silted soil is about 50 cm deep. If the soil is good quality, 18ha of protective forest could be planted at the shore side of the geotube dyke.

However, many geotubes have been damaged for a number of reasons, including being hit by parts of trees affected by strong waves.

The province is now improving inspections of the geotube dyke and repairing the tubes.

The two-phase project cost more than 56 billion VND (2.39 million USD), including 46 billion VND from the central budget and the rest from the province’s budget.

The second phase in 2018 -20 includes growing trees in the alluvial ground and building the rest of the facilities for the project.

However, the amount of silted soil inside the embankment is still not sufficient for growing mangrove trees, so the second phase has been delayed.