A ceremony was held in Ho Chi Minh City on June 15 to mark the 20th anniversary of a fund that provides scholarships to school children of ethnic minority groups, with the participation of Permanent Deputy Prime Minister Truong Hoa Binh. 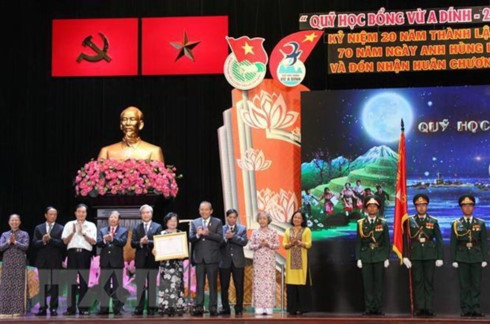 The management board of the Vu A Dinh scholarship
fund is honoured with a Labour Order, First Class.

On the occasion, the management board of the Vu A Dinh scholarship fund was honoured with a Labour Order, First Class.

Speaking at the event, Binh commended the fund for its operation over the past 20 years. It has conducted many projects that support school children of ethnic minority groups all over the country who strive hard in their study. The official further said that in the time to come, the fund should join hands with individuals and organisations in further intensifying the work for the benefit of the children.

For her part, chairwoman of the fund Truong My Hoa, who is also former Vice President of the country, briefed participants on the fund’s activities over the past 20 years.

Many recipients of the scholarships expressed their gratitude to the fund and determination to try on in their study. They said they hope to contribute to the socio-economic development of their home towns after their study.