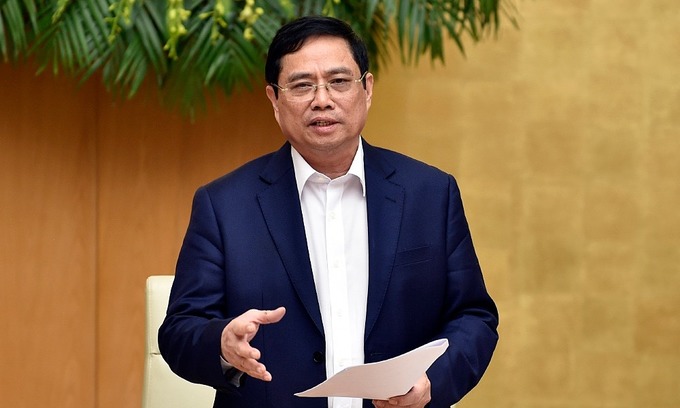 Prime Minister Pham Minh Chinh Thursday asked his cabinet members to put citizens and businesses at the heart of their services.

Presiding over his first cabinet meeting, Chinh said the government's focus would be on controlling inflation and ensuring macroeconomic stability, enhancing the application of science and technology, and boosting innovation and digitalization.

He stressed that each government official must be exemplary in conduct and willing to listen to criticism from multiple sides.

Those who "dare to think, do and take responsibility for common interests" must be "protected," Chinh said.

He also asked the cabinet to expand decentralization and enhance supervision and accountability in their work.

Authorities need to focus on safety and avoidance of wastage while implementing the Covid-19 vaccine inoculation program, the PM said.

The Ministry of Health was requested to complete its plan for "vaccine passports" and create opportunities to hasten domestic vaccine production.

On promoting the disbursement of public investment capital, the government requests local and ministry leaders to be responsible for the disbursement execution, with a focus on vital infrastructure.

The government also agrees to issue a decree to extend the time period for paying taxes and land usage fees in 2021, while requesting the Ministry of Labor, Invalids and Social Affairs to evaluate the effectiveness of resolutions that support vulnerable people amid the Covid-19 pandemic.

Chinh, former head of the Party Central Organizing Commission, succeeded his predecessor Nguyen Xuan Phuc as the latest prime minister of Vietnam early this month. He is the first head of the Central Organizing Commission, an advisory body to the party with the main responsibility of nominating and approving the appointment of officials throughout the country, to be appointed prime minister and the ninth person to take the position since 1945.