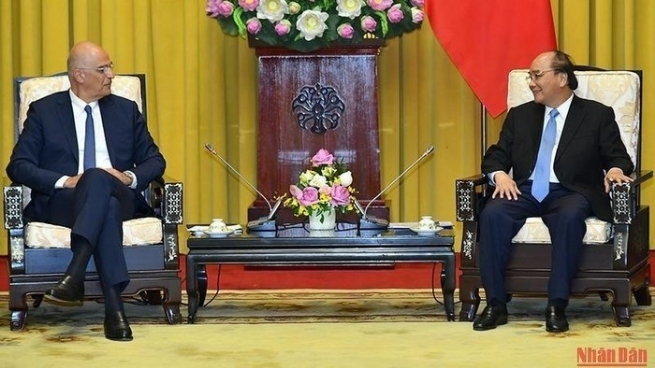 At a reception for Greek Foreign Minister Nikolaos Dendias in Hanoi, the President thanked Greece for its gift worth 50,000 EUR to the Vietnam Olympic Committee, and its donation of 250,000 doses of COVID-19 vaccine in late 2021.

Vietnam always keeps in mind Greece’s good sentiments and valuable support during the Southeast Asian nation’s struggles for national independence and reunification as well as the present cause of national construction and development, President Phuc said.

He appreciated the sacrifice of Greek Hero of the Vietnam People's Armed Forces Kostas Sarantidis, also known as Nguyen Van Lap, and expressed his delight to know that the hero’s remains have been brought to Vietnam as he wished.

Noting with pleasure positive developments of the Vietnam-Greece relations, the leader viewed Greek President Katerina Sakellaroupoulu’s visit to Vietnam last May as a hallmark in the bilateral ties, contributing to increasing mutual understanding and facilitating mutually beneficial development.

For his part, Dendias conveyed regards and wishes of President Sakellaroupoulu to President Phuc.

Greece attaches importance to Vietnam’s role and position in the region, and backs Vietnam in its efforts to enhance the partnership and comprehensive cooperation with the EU, he affirmed.

The two countries should continue their effective coordination and mutual support at multilateral and international forums, the FM continued.

Regarding the East Sea/South China Sea issue, he emphasised Greece’s support for Vietnam’s and ASEAN’s stance on settling disputes by peaceful measures in line with international law, particularly the 1982 United Nations Convention on the Law of the Sea (1982 UNCLOS), contributing to maintaining peace and development in the region and the world.

Phuc used the occasion to thank the Greek Government for their support to the Vietnamese community in the host country, especially during the COVID-19 spread, and welcomed Greece’s idea to build a monument of late President Ho Chi Minh in Greece.