VGP – PM Nguyen Xuan Phuc hosted a reception for former Canadian PM Jean Chretien who is on a visit to Viet Nam to promote cooperative projects. 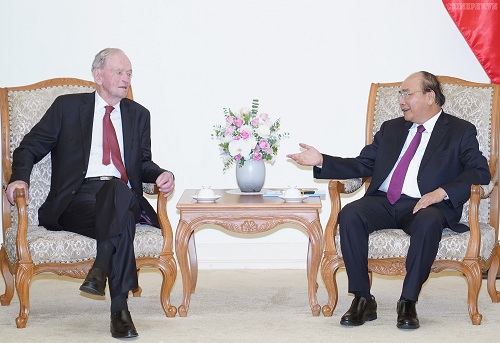 PM Phuc praised the good sentiments which Mr. Jean Chretien had given to Viet Nam and his contributions to the bilateral ties over the past time.

The host leader took the occasion to thank the former Canadian PM for promoting the Memorandum of Understanding on technical assistance to enhance management, investment and operation of airports which was signed in June last year in Canada on the sidelines of the expanded G7 meeting.

As Viet Nam has high demands for infrastructure development especially for upgrading airports, Phuc expressed his hope that Mr. Jean Chretien would push the technical package on airport upgrading.

The PM also expected that Mr. Jean Chretien would continue efforts to further promote the Viet Nam-Canada relations especially in economics, trade, and investment; and to call on more Canadian enterprises to do long-term business in Viet Nam.

In reply, Mr. Jean Chretien recalled his first visit to Viet Nam in 1994 as the Canadian PM. According to the guest, the two countries enjoy numerous similarities for further cooperation./.