The pharmaceutical industry is growing steadily because input costs are stable compared to other industries and businesses are less affected in a high inflation environment. 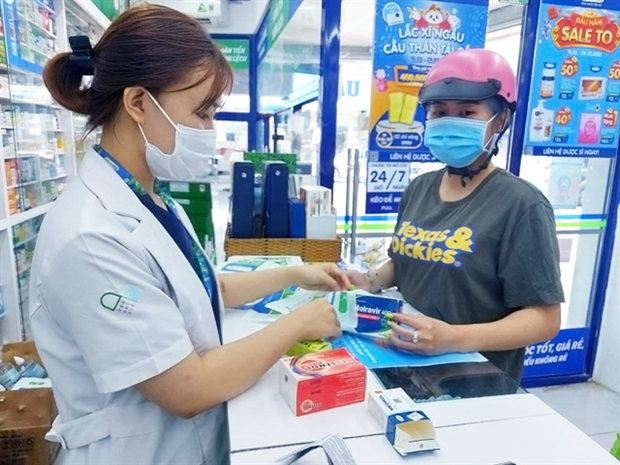 A customer buys medicine at a Pharmacity store. (Photo: Pharmacity)

The pharmaceutical industry is growing steadily because input costs are stable compared to other industries and businesses are less affected in a high inflation environment.In the first quarter of 2022, according to the business results of the listed pharmaceutical companies, SSI Research Co estimated that the total pharmaceutical revenue of the country increased by 7 percent over the same period last year, in which the revenue from the pharmacy channel increased by 23 percent over year-on-year and the hospital channel decreased by 5 percent year-on-year.SSI Research assesses that the pharmaceutical industry will grow strongly in the future. Pharmaceutical demand will continue to increase until the end of 2022 when revenue from the hospital channel recovers strongly, especially in southern provinces, helping to increase the revenue reach of 13 percent of the figure in the second half of 2022 and 11 percent of the whole of 2022, recovering close to pre-COVID-19 revenue levels.The mass opening of new pharmacy chains is set to boost the pharmaceutical industry's revenue in the next few years. The three largest drugstore chains, Long Chau, An Khang and Pharmacity, are rapidly expanding across the country.According to a survey by IQVIA, the total number of drug stores in the country in 2016 was 55,300, with only 186 stores belonging to the pharmacy chain, approximately 1 percent of market share. In 2021, after a long period of tightening regulations for the over the counter (OTC) channel and raising standards for each pharmacy, the total number of operating drug stores reached 44,600 units, of which 1,600 stores belong to the drugstore chain, accounting for nearly 4 percent of market share.Although the proportion of drugstore chains is still quite small, the ambitious plan of the top three drugstore chains is to bring the total number of drug stores in the pharmacy chain to 7,300 in 2025, equivalent to 16 percent market share and thus helping the pharmaceutical industry's revenue to increase more than the actual demand of the people in the next 2 - 5 years.However, these drugstore chains still deal in the majority of supplements and imported drugs, so the sudden growth in the number of stores of these chains does not imply a rise in the revenue of domestic pharmaceutical manufacturing enterprises.Imported drugs continue to be a concern for domestic enterprises. The total value of Vietnam’s drug imports increased by 21 percent year-on-year in 2021 and continued to increase by 25 percent in the first quarter of 2022, while imported raw materials for domestic drug production increased only 3 percent over the same period in 2021 and down 11 percent year-on-year in the first quarter of 2022.High profitsAs assessed by SSI Research, the pharmaceutical business is less affected in a high inflation environment, with stable input costs compared to other industries.According to the financial statements of the pharmaceutical companies listed in Vietnam, the average input costs of most pharmaceutical companies have quite similar proportions: 60 percent of raw material costs, 20 percent of labour costs, 10 percent for advertising or marketing costs, 4 percent depreciation, 3 percent R&D costs and 3 percent for logistics and other costs.Although the cost of raw materials accounts for the largest proportion, it is broken down into many different types of active ingredients and pharmaceuticals. For example, paracetamol, which is the most common and simplest formulation, is made up of three active ingredients, five excipients, capsules and packaging, and can be further broken down into 20 different basic materials such as petroleum, plastic granules, gelatin and corn starch.As a result, the cost composition of the final tablet will be very fragmented and the pharmaceutical business will be less affected by inflation, unless there is a significant disruption in the supply chain of raw materials such as a COVID-19 outbreak or changes in environmental protection policy and closure of contaminated pharmaceutical factories as in China in 2016.China's implementation of the "zero COVID" policy in 2022, although it lasts beyond 2020, has not yet recorded any significant impact on the supply chain of pharmaceutical ingredients because the main pharmaceutical producing provinces such as Hubei, Shandong, and Jiangsu currently do not have any strict lockdown policy.India, the second largest producer of medicinal ingredients, is currently accelerating capacity expansion with capital incentives of up to 200 million USD and other significant tax incentives to replace the dominant position of China in the market for supplying raw materials for drug production.According to PwC, 2022 could be a year of recovery for global M&A activities after two years of the COVID-19 pandemic, with the value of global pharmaceutical M&A deals expected to increase by 32 percent over the same period last year.Pharmaceutical companies are also searching for M&A deals as they have kept an abundant amount of cash accumulated during the pandemic./.