VGP – As of April 1, 2019, Viet Nam’s population was over 96.2 million, becoming the world’s 15th most populous country and the third in the Southeast Asian region. 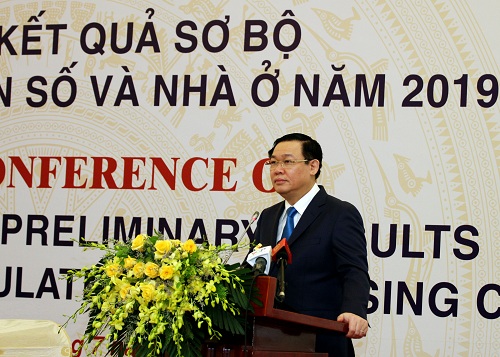 Deputy PM Vuong Dinh Hue at the national video-teleconference to announce
preliminary results of the population and housing census on July 11 in Ha Noi.

The Central Population and Housing Census Steering Committee convened a national video-teleconference to announce preliminary results of the population and housing census in Ha Noi on July 11.

After ten years, since 2009, the population scale grew by 10.4 million with average growth rate of 1.14%, a slight decrease of 1.18% against the previous decade.

The census found that Viet Nam had a high population density with 290 people per km2, up 31 persons per km2 in comparision with 2009.

Over the past decade, the urbanization rate took place rapidly and broadly. In 2019, over 33 million people are living in urban areas (accounting for 34.4%). Meanwhile, over 63.1 million others are staying in rural areas, making up 65.6%.

The country housed over 26.8 million households, up 4.4 million in comparison with 2009. Up to 93.1% of them lived in well built houses or semi-permanent houses.

Average housing area was 23.5m2 per person, 6.8 m2 bigger than that in the previous decade.

However, 4,800 households were dealing with homelessness.

Addressing the event, Deputy PM Vuong Dinh Hue who is the Head of the  Central Population and Housing Census Steering Committee said that the census provided key and reliable  information on population, demographic situation, housing, immigration for the Party, State, National Assembly, Government and localities to perfect the legal system, strategies, and policies on socio-economic development especially in population and housing.

He stressed the goal in which no one is left behind. Hence, it is necessary to conduct appropriate policies for difficult subjects in rural areas and those who are homeless.

The Deputy PM assigned the General Statistics Office to make analysis tables  and official reports which will be published this December.

Mr. Hue also noticed that although Viet Nam is experiencing a period of “golden population structure,” aging population is occurring  rapidly, thus population policies must be adopted to avoid the problem./.