The National Assembly Standing Committee, 14th tenure, opened its 34th session on May 8 under the chair of NA Chairwoman Nguyen Thi Kim Ngan. 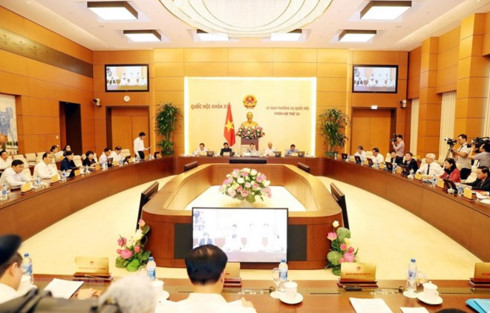 The NA Standing Committee is scheduled to continue discussing the draft law on amendments and supplements to some articles of the Law on Public Investment, and start debating the draft Labour Code (revised), and Vietnam’s joining the International Labour Organisation’s Right to Organise and Collective Bargaining Convention No.98.

Participants will consider the allocation of funds from the state budget to local budgets for road management and maintenance, and the foreign capital supplement of 2019 state budget estimates for the central province of Ha Tinh.

The NA Standing Committee is scheduled to approve a list of projects using the reserve middle-term public investment for 2016-2020 from the state budget, as well as the addition of a new list to the middle-term public investment for 2016-2020; while also discussing the use of 10 trillion VND (431.7 million USD) saved from decreases in investments for the nation’s important projects under the legislature’s Resolution No.71/2018/QH14.

In addition, the committee will also consider the establishment of several administrative units in the southern province of Dong Nai, including Dau Giay township in Thong Nhat district, Nhon Trach township in Nhon Trach district, and six wards in Bien Hoa city

Following the opening formalities, Vice Chairman of the NA Phung Quoc Hien chaired the discussion on the Government’s reports supplementing the assessment of the implementation of the 2018 socio-economic development plans and State budget, along with evaluation of socio-economic performance in the first months of 2019.