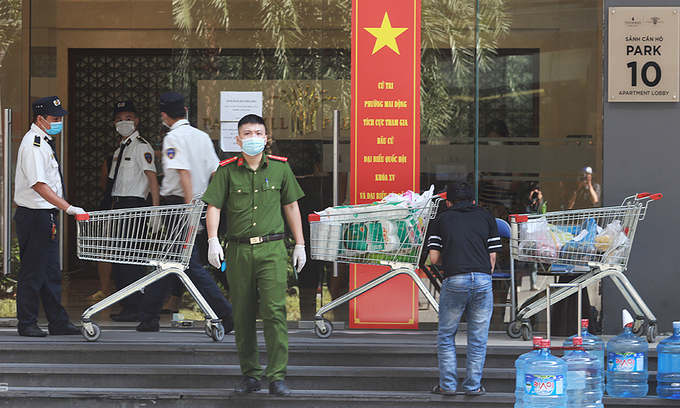 Police and guards quarantine a block at the Times City residential area in Hanoi after
an Indian expert living there tested positive for the novel coronavirus, May 4, 2021.
Photo by VnExpress/Tat Dinh.

An Indian man entering Vietnam to work has tested positive for the new coronavirus after he was released from two weeks of centralized quarantine.

The 37-year-old man came to Vietnam on April 17 and was sent to quarantine at a hotel in Hong Bang District in the northern port city of Hai Phong and stayed there until May 1.

During this period, he had tested negative twice on April 19 and 30.

After completing the quarantine, he returned to Hanoi and stayed with his wife and kids at the Times City residential area in Hoang Mai District.

On Monday, he came to a Vinmec healthcare facility for a commercial Covid-19 test and was confirmed positive. He has been transferred to the National Hospital for Tropical Diseases.

Further tests are needed for him to be tagged a Covid patient.

He did not get out of his house after returning to Hanoi and six people living in the house with him in the past three days have been isolated and had samples taken for testing, according to the Hanoi Center for Disease Control.

Vietnam has blocked entry for foreign nationals since March last year and only allowed foreigners who have diplomatic or official passports or those who are experts, investors or high-skilled workers to enter the country.

All entering the country from abroad must stay in quarantine for 14 days and be tested twice during this period.

The Indian expert has made the third case within six days in which a person tested positive the new coronavirus after completing the 14-day mandatory quarantine.

For the previous two cases, infections have already spread in the community with 35 cases recorded so far in five localities, including Hanoi and HCMC.

By Tuesday morning, Vietnam has confirmed 36 locally-transmitted Covid cases in a fresh community outbreak that started on Arpil 29 after the nation had spent more than one month free of community transmissions. The source of transmission for the one case in Da Nang has not been identified.