A couple stop their bikes along the West Lake in Hanoi at sunset.
Photo acquired by VnExpress.

Hanoi’s Tourism Department has launched a sunset contest on Instagram, the world’s largest photo sharing network, to promote its image.

The contest is part of Welcome to Asia, a cooperation project between the Council for Promoting Tourism in Asia (CPTA), the capital city and 10 CPTA member cities - Tokyo, Bangkok, New Delhi, Kuala Lumpur, Jakarta, Seoul, Taipei, Manila, Tomsk and Hanoi.

Contestants are invited to capture the magnificent sunset beauty of Vietnam’s capital through their lens and share their photos on the organization board's Instagram account, using the hashtags #wta_sunset and #wta_Hanoi.

The contest will be open from now to the end of July. The "Welcome to Asia" campaign aims to attract tourists from Western countries, Oceania, and other countries in Asia. 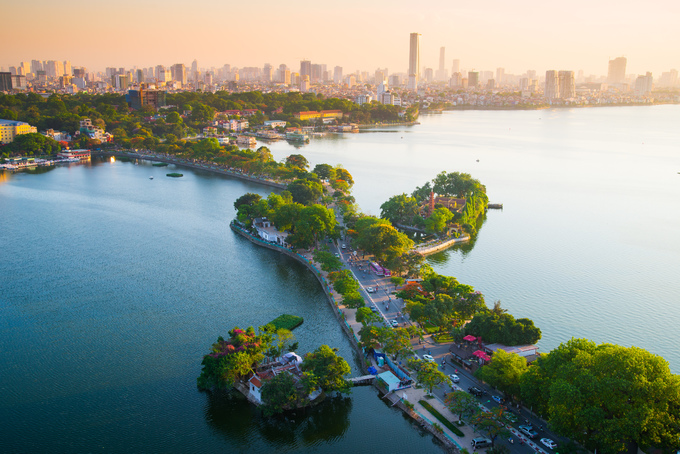 An aerial view of Hanoi at sunset. Photo by Shutterstocks/hoangduy.

2018 was a successful year for Hanoi's tourism sector with a record high 5.74 million foreign visitors, up 16 percent from a year earlier. A survey by its tourism department found foreign visitors spent $92-114 a day on average last year.

Hanoi’s profile also shot up after being chosen as the venue for the historic second summit between U.S. President Donald Trump and North Korean leader Kim Jong-un last February.

Last month, city officials signed a memorandum of understanding with CNN to continue its tourism promotion campaign on social media and air documentaries on the popular cable news network in the 2019-2024 period.

Hanoi was recently named among top 15 destinations in the world by TripAdvisor travelers.