Prime Minister Nguyen Xuan Phuc hosted a reception in Hanoi on July 11 for former Canadian Prime Minister Jean Chrétien, who is on a Vietnam visit to boost cooperation projects between the two countries. 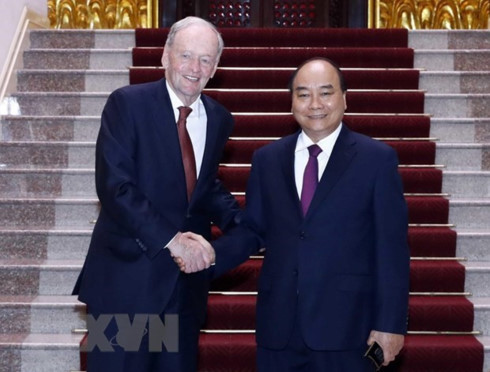 Phuc spoke highly of the guest’s important contributions to fostering the bilateral relations, and affirmed that Vietnam treasures and wants to deepen its comprehensive partnership with Canada.

Chrétien mentioned his recent meeting with the Vietnamese Government leader in Quebec in 2018, and said he had found out resources to support Vietnam in developing airports.

As Vietnam is becoming an attractive destination for international tourists, foreign investors, including those from Canada, are paying attention to Vietnam and want to do business in the country, he stated.

Phuc thanked the guest for helping speed up the implementation of the Memorandum of Understanding on a technical assistance package between the Airports Corporation of Vietnam and the National Bank of Canada signed during his Canada visit last year.

He affirmed that with its high economic growth, Vietnam will have big demand for capital to develop infrastructure, including upgrading airports.

He also expressed his hope that the former Canadian PM maintains his contributions to the two countries’ relations, especially in economics, trade and investment, and continues serving as a bridge for their enterprises.