Several coastal mangrove forests in Hai Phong City are losing trees to garbage swept in from the sea. 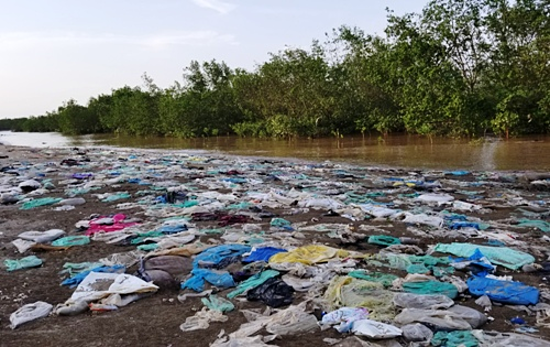 Garbage is seen near a mangrove forest in Do Son District, Hai Phong.
Photo by VnExpress/Giang Chinh.

Bottles, lightbulbs, television screens and nylon are among the garbage items found in profusion in coastal mangrove forests in Tien Lang and Do Son districts.

The trash was swept into the forests from several estuaries after heavy rains, said Vu Van Phuong, a fisherman in Tien Lang District. "Besides the trash, there are bags containing dead pigs as well," he said.

Despite efforts by local authorities and people to remove the garbage, the sheer volumes prevent them from being completely removed.

The trash is believed to have flowed to the sea from several mainland rivers, said Pham Van Lap, head of the Hai Phong Department of Agriculture and Rural Development. "When the tides rise, they are swept into the forests from the sea."

Echoing Lap, Tran Van Khanh, vice chairman of the Tien Lang District People’s Committee, said it was difficult to gather all the trash because of their sheer amount and the fact that some forests are situated too far from the sea wall, preventing access.

"Our district would soon launch a trash-collecting program to protect the environment, but it is expected that we would only be able to collect trash in the coastal pine hill. We can’t do anything about the other locations," said Khanh. 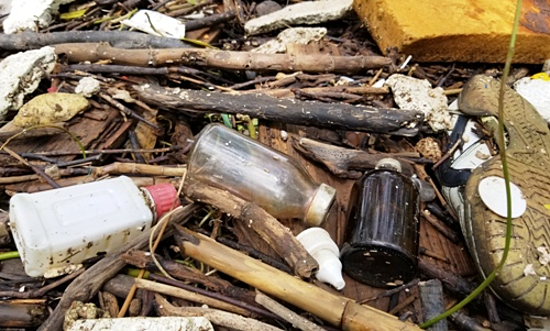 Bottles and shoes are seen among the trash. Photo by VnExpress/Giang Chinh.

The port city of Hai Phong is home to about 2,500 hectares of coastal mangrove forests.

"Let’s try to ensure that by 2021 stores, markets, supermarkets in urban areas will not use single-use plastic goods; and by 2025, the whole country will not use disposable plastic products," he said.Prime Minister Nguyen Xuan Phuc said last week at a national anti-plastic parade that Vietnam needed to take "practical, specific actions to control and prevent the generation of plastic waste."

Vietnam should also limit and move towards ending import and production of plastic bags which are difficult to decompose, Phuc added.

Vietnam has recently taken several measures to tackle its plastic problem. Last month, Thua Thien-Hue Province's government directed its workers not to use plastic water bottles or plastic bags at the workplace. Some supermarket chains have also begun to use banana leaves to pack vegetables instead of plastic.