At the meeting to implement the tasks of August 2022 held on the afternoon of August 4, Minister of Finance Ho Duc Phoc said the Finance sector must make efforts to fulfill the budget task and proactively develop fiscal policies to promote socio-economic development. 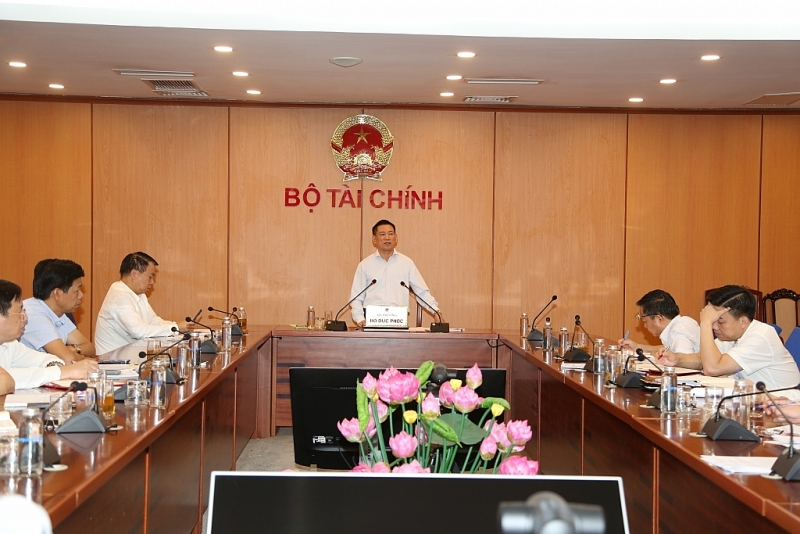 Minister of Finance Ho Duc Phoc delivered a speech at the meeting.

Regarding the rearrangement and handling of public assets, in July, the Ministry of Finance approved a plan to rearrange and handle 16 housing and land facilities of ministries and central agencies.

Also in July, the Ministry of Finance actively monitored and grasped the situation of world gasoline prices to report on developments in gasoline prices in the world and in the country.

In addition, the ministry worked with the Department of Domestic Market - Ministry of Industry and Trade to issue documents on petrol price management.

Between January and July, groups, corporations, and SOEs divested at enterprises VND382 billion, earning VND2,180 billion. The equitization work has been conducted according to the approved plan.

At the meeting, Mr. Cao Anh Tuan, Director of the General Department of Taxation, said that in terms of state budget collection in July, tax authorities collected VND122,500 billion, bringing the revenue in the first seven months of 2022 to VND911,027 billion, equaling to 77.5% of the estimate and rising 17.2% year-on-year.

If excluding the sudden factor of about VND 34,400 billion, and the policy on the extension of tax and fee deadlines in the first seven months of the year, the tax and fee revenue only grew by 4.7% year-on-year. Analysis of state budget revenue by sectors and industries shows that the domestic revenue growth in the past seven months was contributed by hot-growing industries such as banking, securities, real estate, and oil and gas.

Director General of the General Department of Customs Nguyen Van Can said the budget revenue from imports and exports in July reached VND179.8 trillion, equal to 90% of the estimate.

In addition, the Director General said, through the fight against smuggling and trade fraud, there have emerged very complex drug traffickers, requiring proactive coordination with the local police agencies and specialized forces to strictly follow the direction of the Ministry of Public Security and the Ministry of Finance and it is determined that in addition to good seizures, the arrest of suspects is required.

Regarding the customs IT system, the representative of the General Department of Customs proposed to the Ministry of Finance to soon approve the policy of IT outsourcing services to soon carry out related tasks in accordance with regulations to serve management requirements.

Concluding the meeting, Minister of Finance Ho Duc Phoc noted that the whole sector has strived to fulfill its assigned tasks, promoted fiscal policies, managed the stock market, and managed public assets. However, there are still some limitations that require more initiative, closeness and drastic action.

The Minister also emphasized notable issues in the current period. First, inflation is increasing, not only in the world but also in the country, the risk of high inflation is existing, interest rates are rising, and fuel prices are still high, which leads to difficulties for businesses and affects budget collection.

Second, the Covid-19 pandemic is re-emerging, and resources to respond to the pandemic prevention will also be a problem.

The third is energy security, the Russia - Ukraine conflict has pushed energy prices up, affecting production, business and transportation.

The Minister also said that interest rates are rising, so securities management must be taken into account. Capital access from banks will be more difficult, leading businesses to make many private placements of corporate bonds.

At the meeting, the Minister suggested that the units should continue to advise and manage fiscal policies flexibly and effectively, contributing to promoting socio-economic development. The Minister emphasized that the budget collection task must be completed.