Prime Minister Nguyen Xuan Phuc had a working session with the Vietnam Coast Guard (VCG) High Command in Hanoi on July 11, in which he stressed that the force’s responsibility is very heavy but also very glorious. 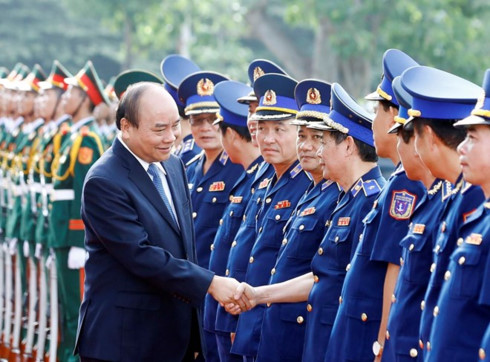 At the High Command’s headquarters, via the communication system, PM Phuc talked to VCG officers and soldiers who were performing their duties on the country’s sea areas. He expressed understanding of their hardships, asking the force to keep their political steadfastness and to weather every difficulty so as to fulfil all the tasks assigned on them.

VCG Commander Lt. Gen. Nguyen Van Son highlighted the force’s comprehensive development, adding that its establishment is a right and timely policy of the Party and State to build a force specialising in law enforcement and other activities at sea.

In any circumstances, the VCG has always been active and creative in performing their duties, thereby helping to firmly safeguard the country’s sovereignty, jurisdiction right as well as security and safety at sea, while ensuring peace and stability for national development.

He added the force has obtained a number of great achievements, especially in coordinating with relevant agencies to uncover thousands of drug trafficking and smuggling cases, along with illegal weapon storage and infiltration. It has also saved hundreds of Vietnamese and foreign fishing boats and cargo ships in distress at sea.

Congratulating the VCG on its attainments, PM Phuc also pointed out that the situation at sea remains complex.

He requested the VCG to focus on performing well its function as the State’s specialised force for enforcing law at sea, joining relevant forces in fighting crimes, and staying ready to help with disaster consequences settlement and search and rescue at sea.

The VCG also needs to have a good grasp and make precise forecasts of the situation at sea so as to stay ready in any circumstances, detect and point out any activities violating Vietnam’s seas and islands, and work closer with other forces to defend the country’s seas, islands and continental shelves.

All members of the force must strictly adhere to the Party and State’s instructions on how to response to situations arising at sea so as to maintain a peaceful and stable environment, the Government leader stressed.

PM Phuc expressed his belief that the VCG will brave any difficulty to continue upholding its traditions to weather all challenges to fulfil assigned tasks.