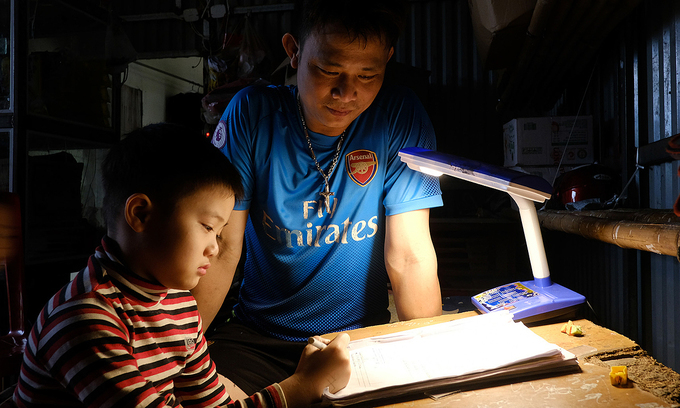 A student in Son Loi Commune of Vinh Phuc Province studies at
home amid a coronavirus lockdown at the commune, February 2020.
Photo by VnExpress/Giang Huy.

Over 320,000 students in Vinh Phuc and Hung Yen would stay home until at least May 8 amid recent coronavirus outbreaks.

Nguyen Van Huyen, director of northern Vinh Phuc Province's Department of Education and Training, on Sunday said his proposal to let over 300,000 students in the province stay home until May 8 has been approved by the provincial People's Committee.

The move would help protect students' health and limit large gatherings, he said. Schools would switch to online learning instead, he added.

It's the third time Vinh Phuc has let its students stay home due to Covid-19 outbreaks since last year. In early 2020, the province's Son Loi Commune became a coronavirus epicenter that recorded seven of 11 cases in the locality.

As of Monday, six community transmissions have been recorded in Vinh Phuc since April 29, all employees of a local karaoke parlor who made contact with a group of Chinese experts that later tested positive for the coronavirus after returning to China.

The same day, the People's Committee of northern Hung Yen Province also let around 20,000 students in Phu Cu District up to high school stay home starting Monday until further notice. Other students in the district would study online instead, it added.

Hung Yen has recorded two community transmissions since April 29, both in Phu Cu District and associated with a coronavirus patient in northern Ha Nam Province, who returned from Japan and tested positive after completing his two-week centralized quarantine in Da Nang City. The man failed to quarantine himself for another 14 days as required.

Previously, Ha Nam had let around 235,000 students stay home until May 9 amid a coronavirus outbreak that infected at least 12 in the province.